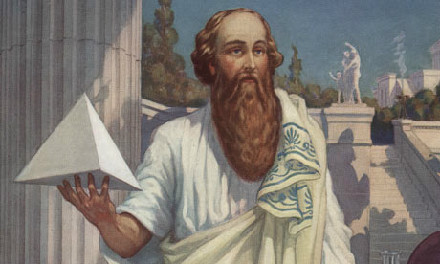 Pythagoras did not write anything down. His teachings were word of mouth and all that we have was written by his followers 100 years after his death.

Considered a mathematician, but foremost a philosopher, Pythagoras was a very important figure in mathematics, astronomy, musical theory, and in the world's history. However, little in the way of reliable record is known about his life and accomplishments. The accounts of Pythagoras inventing the musical scale, performing miracles, and announcing prophecies are probably only legend, and appear to have little historical foundation. Scholars generally agree only upon the main events in his life, and usually combine together discoveries by Pythagoras with those by his band of loyal followers.

. Read More on the Pythagoreans